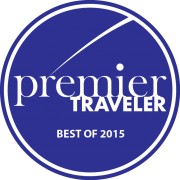 Los Angeles, CA, January 7, 2016 (Newswire.com) - ​Excitement built by the minute as travel industry VIPs arrived in record numbers at the award-winning Sofitel L.A. at Beverly Hills for this highly anticipated evening. Valets escorted the 200-plus guests, many traveling halfway around the world to attend, into the glittering ballroom for Premier Traveler magazine’s Best of 2015 Awards Gala. Photographers were stationed on the red carpet running through the classic Hollywood lobby to capture the special moments. After their photo opportunities, guests moved into the reception to meet old friends and make new ones while enjoying top-shelf cocktails and gourmet prepared hors d'oeuvres.

The lavish occasion continued as the grand ballroom doors opened, and PT Features Editor Janet Forman and actress Cloie Wyatt Taylor officially welcomed guests to the gala as a video created by employees of Munich Airport, voted "Best Airport in the World", played in the background.

Steven Haro, Boeing’s Director of 777/777X Marketing, launched the event with an inspiring speech and later accepted the award for "Best Aircraft Type" for the B-777: the fourth year in a row this plane has been honored.

Later in the evening, Ethiopian Group CEO, Tewolde Gebre Mariam, flanked by a bevy of flight attendants in flowing white robes, said on accepting the airline’s honors: “I am very pleased to receive these awards on behalf of the more than 9,000 strong men and women colleagues at Ethiopian Airlines and I congratulate them for this achievement. I would like to extend my thanks and appreciation to Premier Traveler magazine for the recognition. We attach special importance to these awards since the readers of Premier Traveler Magazine in the U.S. have voted Ethiopian Airlines as "Best Airline to Africa" for the second consecutive year, and "Best Airline in Africa". I wish to thank them for this vote of confidence, which once again reaffirms the quality of the service and product we offer. We currently offer the best connectivity options for the traveling public between Africa and North America with direct flights to and from our three main gateways: Washington D.C., Los Angeles and Toronto, using the ultra-modern B777s and B787s, connecting to more than 53 destinations African destinations.

Gary Huang, Junior Vice President of EVA Air accepting the airline’s award as "Best Airline in Asia” remarked on the growth in the USA . “Earning recognition for the third consecutive year from airline-industry experts and international travelers is gratifying,” said EVA Air Chairman K.W. Chang. “The world has seen our efforts to persistently pursue innovation. EVA will expand our fleet with the new Boeing 787 Dreamliner and introduce more new routes in the future. We are continuing our efforts to give passengers the most comfortable and convenient flying experience possible.

About Premier Traveler (PT) was created as an outlet for its readers’ voices to be heard. Perpetually on-the-go (both domestically and abroad), with high expectations and a taste for luxury, Premier Traveler readers always have something to share—a personal experience, an opinion, a suggestion, a question—and PT was designed to listen and to get the answers they need.