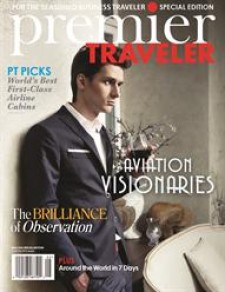 May 28, 2015 (Press Release) - NEW YORK, NY - This spring Premier Traveler (PT) magazine garnered a first place award from the Society Of American Travel Writers (SATW), a professional organization dating back to 1955. Features Editor Janet Forman was crowned for her Editor's Letter and Food for Flight article during the 2015 SATW Contest.

Foreman's articles were selected from entries submitted by professional travel writers and photographers from across the U.S. and Canada. Prior award-winning submissions appeared in such prominent outlets as the Boston Globe, International Travel News, the Miami Herald, Afar and National Geographic Traveler.

"PT is honored that such a well established organization as SATW has recognized the exceptional quality of our content," said PT CEO Jake Porter. "And although our entire staff is to be commended on their efforts and contributions, we congratulate Janet Foreman on her record-breaking achievement."

"This is a first in the record books," said SATW Chairman Laura Phillip Bennet. "As far as we know no Editor's Letter has ever won this contest. This is especially significant considering that Janet's entry was being judged against several hundred other entries from some of the top travel writers in the U.S. and Canada."

"His insistence that the magazine produce content that will address and inform the needs of today's modern, wordly and savvy jet setter are unwavering," said Giani. "With an infectious enthusiasm, Rodriguez delivers a unique publication geared towards a new breed of traveler - one that embraces a hip and elite lifestyle all its own."

Premier Traveler (PT) was created as an outlet for its readers' voices to be heard. Perpetually on-the-go (both domestically and abroad), with high expectations and a taste for luxury, PT readers always have something to share -- a personal experience, an opinion, a suggestion, a question -- and PT was designed to listen and to get the answers they need.